You Mean It Or You Don't: James Baldwin's Radical Challenge 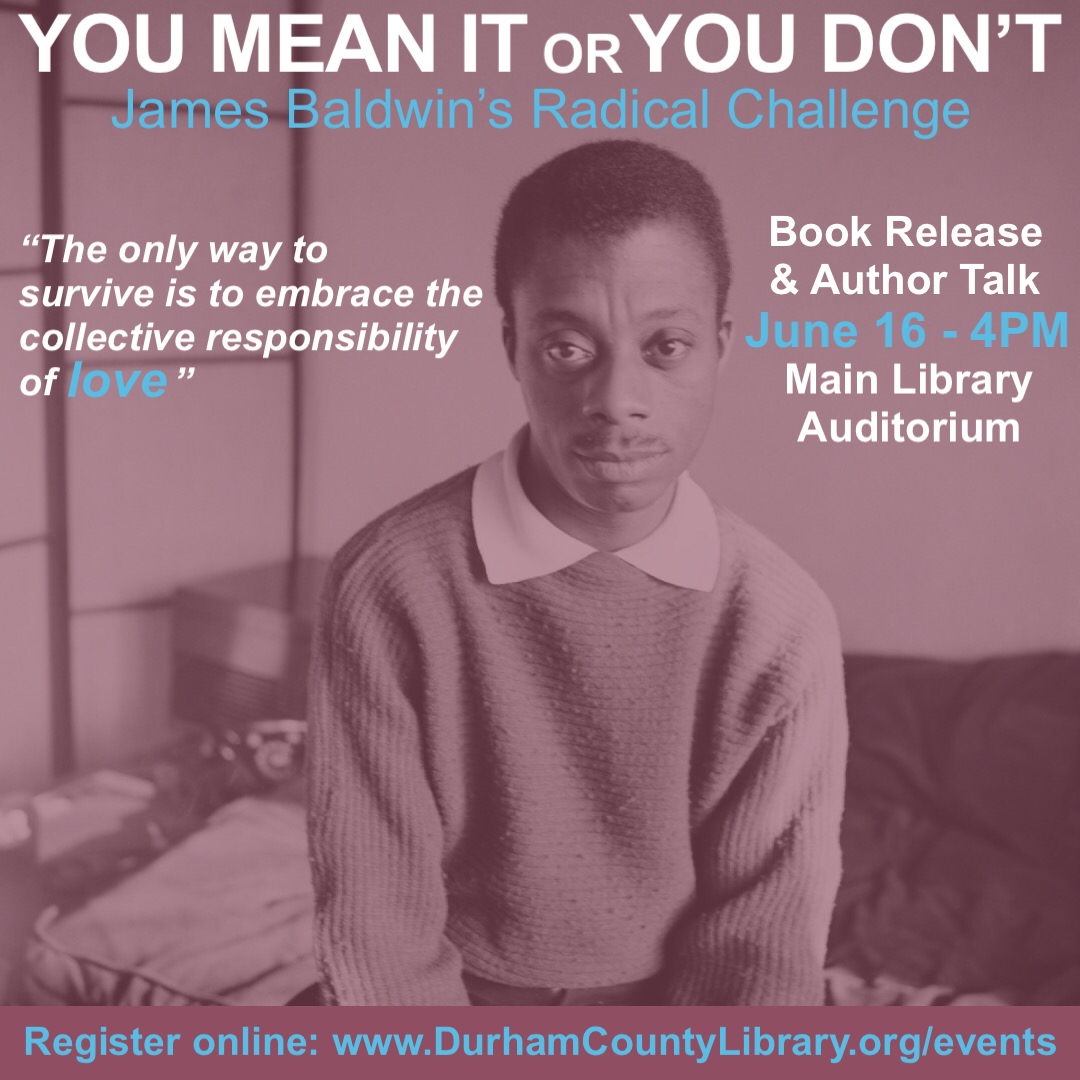 You Mean It Or You Don't: James Baldwin's Radical Challenge

Join Durham County Library and Duke University's Samuel DuBois Cook Center on Social Equity for the release of Jamie McGhee and Adam Hollowell's new book You Mean It or You Don't: James Baldwin's Radical Challenge. The authors will deliver a short talk on their work, followed by a meet and greet with refreshments provided and an opportunity to purchase copies of the book.

After a speech at UMass Amherst on February 28, 1984, James Baldwin was asked by a student: "You said that the liberal façade and being a liberal is not enough. Well, what is? What is necessary?" Baldwin responded, "Commitment. That is what is necessary. You mean it or you don't."

Taking up that challenge and drawing from Baldwin's fiction, nonfiction, poetry, and interviews, You Mean It or You Don't will spur today's progressives from conviction to action. It is not enough, authors Hollowell and McGhee urge us, to hold progressive views on racial justice, LGBTQ+ identity, and economic inequality. True and lasting change demands a response to Baldwin's radical challenge for moral commitment. Called to move from dreams of justice to living it out in communities, churches, and neighborhoods, we can show that we truly mean it.

Welcome to life with James Baldwin. It is raw and challenging, inspired and embodied, passionate and fully awake.

Jamie McGhee is a novelist, playwright, and essayist. For her fiction, she was named a James Baldwin Fellow in Saint-Paul de Vence, France, and a Sacatar Fellow in Itaparica, Brazil. She has also been awarded artist residencies at Blue Mountain Center in New York, Zentrum für Kunst Urbanistik in Germany, and Sa Taronja Associació Cultural in Spain. With ties to the eastern US, she is now based in Berlin, Germany.

Adam Hollowell teaches ethics and inequality studies at Duke University, where he directs the Global Inequality Research Initiative at the Samuel DuBois Cook Center on Social Equity. He lives in Durham, North Carolina.

"You Mean It or You Don't is an extremely timely, transformative piece. It reminds readers of the intensity of James Baldwin's moral demand for social transformation and intersectional equity. It's not just a book--it's a much-needed blueprint." --Valencia Clement, thought leader, artist, and scholar

"Both reflective and redemptive, Hollowell and McGhee's close reading of Baldwin's works and his deeply personal impact on their thinking and activism proves that philosophy can propel us to act, with clarity, in the cause of social justice." --William A. Darity Jr., Samuel DuBois Cook Professor of Public Policy, African and African American Studies, and Economics, and the director of the Samuel DuBois Cook Center on Social Equity at Duke University

"Hollowell and McGhee do something really remarkable here by giving us Baldwin's life story (but not just his biography), his works (and not just a lit review), and his activism (not just a how-to manual). I love encountering Baldwin in this way--it's fresh and hopeful, and it will be meaningful to those who want to live out Baldwin's vision." --Mihee Kim-Kort, author of Outside the Lines: How Embracing Queerness Will Transform Your Faith

"As superb an invitation as one will find to Baldwin that simultaneously breathes the necessary urgency for these times into both those familiar with the artist and newcomers. As a reader you will walk away reluctantly grateful to have been shaken from the façade of safety." --Solomon Hughes, actor and visiting faculty at Duke University

"In You Mean It or You Don't McGhee and Hollowell bring the much-needed prophetic voice of James Baldwin into conversation with our current moment. Equal parts practical and poetic, You Mean It or You Don't inspires readers to dream of a liberated future, hands us the tools, and then dares us to build it together." --Elle Dowd, pastor and author of Baptized in Tear Gas: From White Moderate to Abolitionist

"Few books help us focus on Baldwin's power to help us create and understand our relevance to each other as well as You Mean It or You Don't. Pick it up. Read it to yourself; read it to each other. That's what this is all about: we either mean it or we don't." --Ed Pavlic, author of Who Can Afford to Improvise?: James Baldwin and Black Music, the Lyric and the Listeners